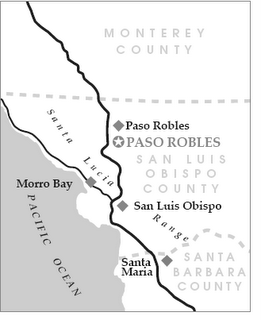 Winemonkey and I had us a little blind tasting the other day and, in addition to serving as an excellent palate testing exercise, it unveiled a surprise or two. We were tasting wines from Paso Robles, , an 'on the rise' wine region which just happens to be the location of the upcoming PBS reality series “The Wine Makers.” The show is set to air in fall 2007 and your favorite Winemonkey just happens to be a contestant. Intrigued? We will have more to come on that in the next few days.

Anyhoo, one of the grapes that grows well in Paso Robles, which is located in the center of ’s between and , is Zinfandel. In fact, it is historically the area’s first successful wine variety. We chose the 2004 Rosenblum Cellars Zinfandel Appellation Series Paso Robles at around $16 along with the 2003 Linne Calodo Outsider from Paso Robles (a blend, the vast majority Zinfandel) ringing in at $45. This, we surmised, would give us a decent idea of how typical Paso Robles Zins are produced and how they come across on the nose and palate.

I filled Winemonkey’s two glasses with a tasting sized pour while he looked away and he did the same for me. As we sat down to discuss the wines (not knowing which was which of course) we either had completely differing opinions or the wines were poured in the same order. One glass of Zin we found overly sweet, almost sugary, and rather simple. The other seemed to have more depth to it, perhaps from other varietals being blended in as well as more care being taken during winemaking. Using our prior knowledge and, unfortunately for this particular tasting, knowing the general pricing of the two bottles, we pegged the sweet, simple wine as the Rosenblum and the more complex as the Linne Calodo.

As you may have guessed by now, we were wrong. Dead wrong. We had indeed poured the wines for one another in the same order and, lo and behold, the seemingly more complex and well-balanced wine turned out to be the Rosenblum! Before you get all excited and run out and buy a case of Rosenblum Paso Robles Zinfandel, let me just note that we were not especially impressed by either wine. In fact, we have blogged about some well-priced Zins in the past and prefer them all to the Rosenblum. The fact remains, however, that it beat out a more expensive wine from the same area which, incidentally, has a year more age on it. Pretty surprising and, well, pretty impressive.
I guess the moral of the story is never to judge a book — or a wine — by it’s cover. In this case all you get is an emptier wallet.

Stay tuned for breaking news about the reality series "The Wine Makers" on PBS!