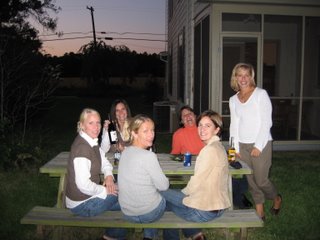 ...Well, not really. I still love the stuff for what it is. I will just think twice before aiming the cork at anyone that I don't want to see end up with a shiner. Let me explain.

As mentioned in a previous post, I was planning on bringing a few bottles down to a "girl's weekend" in , thinking this the perfect elixir to kick off the festivities. The reunion was this past weekend and I packed the bottles in a wine bag and secured them in the recommended upright position for the drive down. As soon as we arrived, I vigilantly transferred them to the refrigerator in, yet again, the recommended upright position.

Not to bore you with the details but we decided to pop the bottles open for Friday cocktail hour. Now, I honestly don't know if this is a typical characteristic of Moscato d'Asti but the first bottle had a seriously angry cork that did not want to part ways with its bottle. I had a 3- 4 minute long wrestling match with it before it so much as budged. When it started to show some signs of surrender, I gave one last forceful tug. That is when all hell broke loose. The cork, and the corkscrew, came soaring out of the bottle towards my head. As my body convulsed and was thrown backwards, I saw that the bottle was basically levitating off the counter (for the record, other people saw this too and, no, we had not been drinking beforehand). It was mayhem. The girls were either screaming as if they saw a mouse or laughing uncontrollably, stopping every so often to make sure that I was still in one piece. I was a bit dazed and confused, but otherwise fine, the frothy lava of semi-sparkling wine slowly surrounding me and flowing throughout the kitchen. After we all calmed down and decided that the bottle was possessed, we soldiered on and opened the second one – out on the lawn and pointing away from human life.

The reason this is more than just a hilarious memory on the “Monday after” is that it got me thinking about the chemistry of it all. The wine is frizzante -- or semi-sparkling, which means there is much less pressure in the bottle than in Champagne or even Moscato's second-rate cousin Asti Spumante. Given that the bottle (supposedly) has less pressure, the wine is corked with a modified version of a regular still wine cork and not with a sparkling wine closure. All you need is a corkscrew to open it. Or so they say. I have opened bottles of Moscato d’Asti before and, although I do remember going a few rounds with the cork, it certainly was nothing like this. I suppose it was all just a fluke. Anyway, best to point it away.
Posted by Anonymous at 4:10 PM